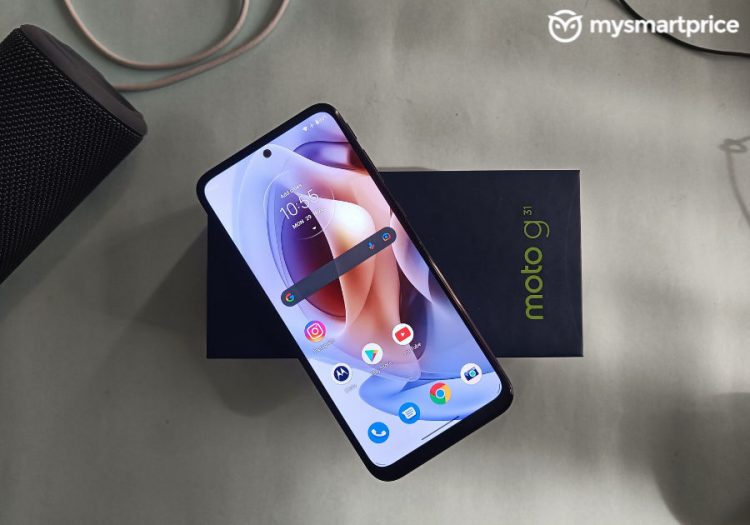 The long-lost brand Motorola has been producing a lot of good smartphones lately. Besides, it is focusing on making a variety of cellphones and pricing all of its devices at the best possible rates. Be it a budget-friendly, mid-range device or an alluring premium phone, and Moto is giving tough competition to the big names like Apple and Samsung. The new Moto G31 is a similar addition to their list that features an AMOLED panel, a big battery, a compact design, and a price that will not cost you an arm and a leg.

The new Moto G31 doesn’t carry a design never seen before. However, the device is 8.45mm thick, which provides a firm grip. Besides, the eccentric lines on the rear panel also play a vital role.

The rear panel is made up of plastic and lacks the premier feeling of a glass panel. Instead, an array of vertically aligned triple cameras is set up on the back. Similarly, you can find the fingerprint sensor underneath the bat-wings logo in the back panel.

The mid-range Moto G31 has a thicker bezel running around the display, which is not entirely pleasing to the eyes. Similarly, the selfie camera is housed under a waterdrop notch with a Type-C charging port and speaker at the bottom.

The new Moto G31 incorporates a 6.4-inch big AMOLED display with FHD+ resolution. It is absorbing to find a device under Rs.25,000 with an AMOLED display. Further, the display’s punchy colors and deep blacks make the device even better.

Although the colors are crisp and vibrant, we think that Motorola could have included a slightly brighter display. The device is, therefore, quite difficult to use under direct sunlight. Similarly, we see another downside in the refresh rate. Coming at a price of around Rs.25,000, we certainly expect a device to have a 90Hz refresh rate. However, Moto G31 supports a maximum of 60Hz refresh rate.

Moto G31 is built around the MediaTek Helio G85 SoC, which is still a downgrade as its predecessor featured the Snapdragon chipset. However, the performance is satisfactory with occasional stutters, which is common in mid-range devices. In addition, the device gets slightly warm while playing graphically demanding games.

In terms of battery, the new Moto G31 includes a big, sturdy 5000mAh battery that will easily last for 36hours. Likewise, the device comes with a 20W TurboPower fast charger.

As said earlier, Moto G31 incorporates a triple camera set up in the back, with a 50-megapixel camera being the primary shooter. The 8-megapixel ultrawide angle snapper which also works as a depth sensor accompanies the primary camera. Similarly, the device also includes a 2-megapixel sensor for macro photography.

All the sensors capture a decent picture with satisfiable detailing and sharpness because it is a mid-range device.

The camera app also has dual capture, night mode, portrait mode, cinemograph, panorama, cutout, and spotlight. Besides, it also has slow-motion and time-lapse modes for video.