SONY A80J: Certainly One Of The Best Tv Money Can Buy 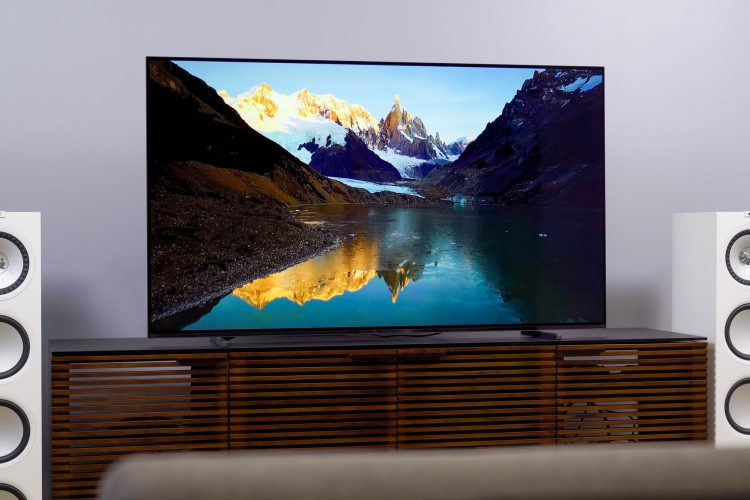 SONY A80J: Certainly One Of The Best Tv Money Can Buy

Sony’s flagship TVs for 2021 are driven by the company’s all-new BRAVIA XR technology, which delivers incredible image quality and performance. Today we’re looking at Sony’s OLED TV offering for 2021, the Sony A80J. The Google TV UI is used for the A80J. It has certain design similarities to its predecessor, the A8H, as well as several new features. Simply said, if you want one of the greatest TVs for watching content, the A80J should be at the top of your list. However, how does it compare to the competition? Let’s see what we can find out!

The display, for starters, is an OLED screen with self-emitting pixels. This gives the TV deep blacks and an infinite contrast ratio. The TV also provides excellent viewing angles. The TV has a peak brightness just below 300 nits in SDR and slightly higher than 750 nits in HDR. This makes the TV extremely bright. With the cinema preset, the TV is very color correct out of the box, with a delta error of 2.7 out of the box, and a delta error of 2.5 with the custom preset.

The Custom for Pro profile provides more precision and allows you to experiment with more options than the other presets. Overall, the TV offers a terrific display for content consumption, according to tests. Let’s have a look at how this works in practice.

HDR 10 and Dolby Vision are supported on the Sony A80J. One thing to keep in mind is that the TV can get extremely bright. The beauty of its performance is that it can keep specular highlight elements in HDR video fairly well. Surprisingly, the TV is bright enough for content consumption in a dimly lit environment. However when it comes to dark passages, it suffers slightly. In a well-lit environment, there are a few ways to appreciate this TV.

Leaving the light sensor on modifies the backlighting as well as the contrast on the TV to try to emphasize dark features. You may also adjust the HDR tone mapping to ‘Brightness Preferred’ and modify other variables such as peak luminance.

This improves the TV’s performance and, unexpectedly, there were no banding issues.  If you want to obtain some retina-burning brightness when watching HDR video in a dark room, these settings work great (which can be a treat if you have the right content). With the HDR tone mapping set to brightness preferred, there is practically no gradation or banding, which is excellent.

One of the greatest speaker sets on a TV is Sony’s Acoustic Surface Audio+ technology. The TV has two Actuators and two Subwoofers. Moreover, the entire screen functions as a speaker since the Actuators vibrate the screen to make sound. Channel separation is the most significant benefit of Sony’s Acoustic Surface Audio+. As a result, as vehicles zoom across the screen in action movies, you can really feel the audio change from right to left, adding to the sensation of immersion.

For a typical living room, the speakers may get very loud. Even in a game like Ghost of Tsushima, you get a feeling of an archer’s position off-screen and the sound of their arrows shooting across the screen. While it’s too soon to comment on its performance, the A80J has also gotten an upgrade to accommodate 360-degree audio. This should improve with the TV’s total sound output.

Since the inception of Smart TVs, Sony has been in charge of the Android TV OS. However, the company is now switching to Google TV.  The UI is simple to set up and takes a content-first approach, as we’ve seen with Xiaomi’s PatchWall UI in the past. The UI of the X80J is quite slick, and there was no lag or jitter on the television. The voice assistant also performs admirably. Sony has a solid track record of upgrading its TVs. Therefore, you shouldn’t be concerned about obtaining the required UI updates.

The A80J comes with the same remote control that we’ve seen on other Sony TVs from the year 2021, and it’s comfortable to use and does a good job. It lacks the pointer-like functionalities featured in LG’s remote controls, but the UI doesn’t require them for navigation. Sony’s remote has the right placement of playback controls – at the bottom. While I’d like to see additional shortcuts for major OTT sites, it’s not a big deal because navigating the TV with the remote in its present state is a breeze.

The A80J shares design characteristics with the Sony A8H, which isn’t a negative thing because the Sony A8H was a well-designed TV with a few flaws. The Sony A80J’s display is extremely thin, with a large rectangular portion at the rear housing the ports and components. The connectivity choices are divided into two sections, one looking outwards and the other facing down towards the rear.

The TV sits on two feet on a table that can be adjusted to sit flat with the table or slightly raised. The feet keep the TV firmly in position with minimum wobbling. The only drawback I can see is that the feet protrude a bit in the front, which may be a problem for people who have a long soundbar sitting below the TV.

The Sony A80J is a cinematic television. It boasts amazing color performance, good brightness for HDR video, and enough of settings to tweak to obtain the best experience possible, depending on the content you’re watching. The most striking aspect of Sony’s XR processor is how it renders SD and SDR video with little edge blur and excellent color reproduction, making it an excellent choice for individuals who watch set-top-box entertainment or have a collection of old DVDs. The TV’s sound output is also excellent. It is without a doubt one of the greatest OLED televisions money can buy.

You can check out our website to find some great deals on pre-owned television sets.