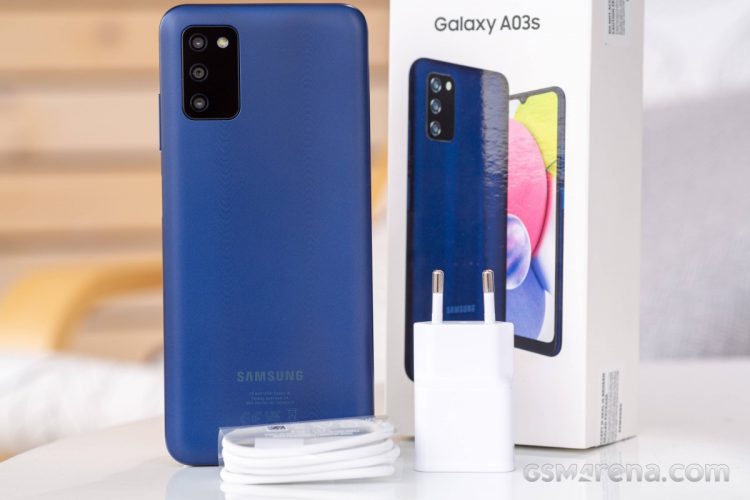 After attaining a great triumph with Galaxy A02s, Samsung is back again with its newer version, the Samsung Galaxy A03s. It is an entry-level device that has a simple design and basic features.

In contrast to the prior year’s model, the new Galaxy A03s has a better stable Wi-Fi, which was one of the major downsides of the predecessor. Apart from the Wi-Fi, we don’t see any other major difference in the spec sheet as compared to the older version. Read the complete article to find out if the Galaxy A03s is a great value for money or not.

The new Samsung Galaxy A03s looks very similar to its older variant, the Galaxy A02s. However, the newer A03s boasts a simple matte back design, unlike the previous model that came with a glossy back and diamond pattern. The device is available in three different colors – black, blue, and white.

Likewise, the new Samsung Galaxy A03s has a plastic body with a thick bezel running around the 6.5-inch display. We can also see a waterdrop selfie notch on the top. The device weighs around 196gm and is quite comfortable to hold in hand.

Samsung Galaxy A03s flaunts a big 6.5-inches PLS display that generates a resolution of 720 pixels. The brightness is relatively lower with 354 cd/m2  on average. Therefore, it is much dimmer than most entry-level devices.

Contrarily, the contrast level and the black level are excellent. Similarly, flickering occurs only at high frequencies at low brightness levels. Thus, if you are too much sensitive to flickering then you should use the device at a lower brightness.

The new A30s is built around the MediaTek Helio P35 chipset which is an upgrade to the Snapdragon 450. Having said that, it is very difficult to spot the exact difference between these two chipsets. The graphic performance on the other hand is better than other smartphones of this price range. Similarly, the speed of browsing the Internet is comparatively faster than the older version.

Samsung Galaxy A03s incorporates the latest Android 11 operating system and the in-house OneUI 3.1 installed on top of it. The device is prominently efficient for single-hand use. Furthermore, the manufacturer has installed a ton of their applications and third-party applications as well.

To our surprise, Samsung Galaxy A03s comes with a DRM L1 certification that enables the user to stream content from major sources in a high resolution. Talking about security, it has quite an old security patch. But considering the low price of the device, this should not be a major concern for us.

The requisite LTE frequencies and Wi-Fi 4 that works on the 2.4GHz band are solely available in the Samsung Galaxy A03s. The Wi-Fi however is far better than before. The downside is that it only supports the necessary 4G networks. Further, the 4G network signal quality is not up to par and performs significantly worse than other devices of the same price.

The phone application of Samsung has a different design than the standard Android application. However, it provides all the mandatory features and functionalities. Similarly, the device performs quite well when it comes to calling. But the sound is not razor-sharp and we hear some noise. Similarly, the microphone also has a snag. The voice is distorted if we speak too loudly.

Samsung Galaxy A03s features the same camera system as the A20s. It has two cameras lenses – the primary lens and the macro lens. There is no wide-angle camera. The 13-megapixel primary lens does a decent job. But it undoubtedly lacks details and dynamics. Besides, the autofocus doesn’t always position the focus accurately. The 2-megapixel macro lens also takes a picture at a very low resolution.

The device can record videos at a maximum of 1080pixels and 30 frames per second. The exposure adjustment and the autofocus are extensively good in videos. On the other hand, the selfie camera struggles a lot in low lights.

Incorporating the Android 11 operating system, 6.5 inches PLS LCD, Triple rear camera setup, and a 5-megapixel selfie camera, the new Samsung Galaxy A03sprice in Nepal starts at Rs.15,500 and goes up to Rs.17,000 for the superior variant.