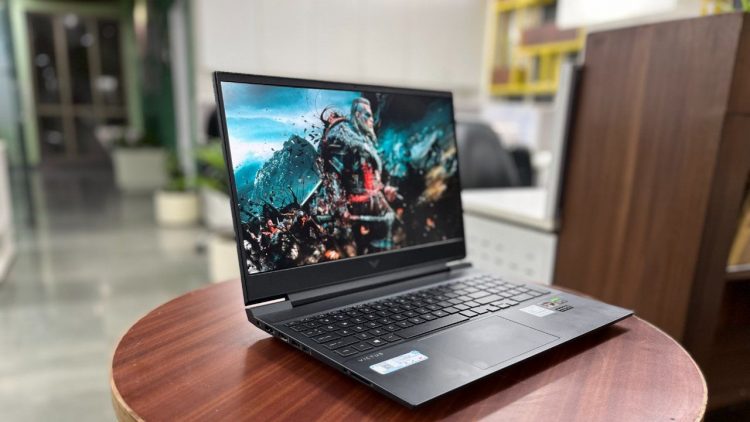 The HP Victus 16 is the first member of the new Victus series which focuses more on delivering affordable gaming laptops. It is an alternative to the famous HP Omen gaming laptops. Apart from coming cheaper, this machine has configurable CPUs from Intel and AMD with up to par graphic cards from Nvidia.

On the other hand, if we have to talk about its portability then it’s a big letdown. Besides, it also has some design issues that make it quite difficult to use on an everyday basis without plugging in a fair number of peripherals.

The understated dark silver or the blue chassis packs two fans that keep the machine cool even in high-performance situations. Likewise, it also features three USB-A ports, one USB-C port, an HDMI out, and an Ethernet port. The availability of all these ports gives HP Victus 16 an extra edge over other gaming laptops of the present time.

HP Victus 16 boasts an aesthetic look with sharp edges and a big “V” logo representing Victus on the top of the case. The laptop also has a loudspeaker that is as impressive as its exquisite appearance.

Having said that, the design of HP Victus 16 undoubtedly has some issues, especially with its weight. The laptop weighs around 5.44pounds which is very heavy and significantly hinders the portability aspect. Lugging it around your shoulder while you are out will be a real challenge.

HP Victus 16 flaunts a beautiful 16.1-inch FHD display that generates a sharp resolution of 1920 X 1080 pixels. Similarly, it also features a 144Hz refresh rate by default. Further, you can also get a higher resolution of 2560 X 1440 pixels with a 165Hz refresh rate if you spend a few extra bucks.

The 16.1-inch display of HP Victus 16 looks bright and expansive and delivers a great gaming performance at 1080p. You can also connect an extra desktop monitor via an HDMI port and play games on a larger monitor.

The audio quality is excellent too. It performs great for listening to music or watching videos. Contrarily, it is quite difficult to speak to their sound quality while playing games. The predominant reason for this is the loud noise from fans during intensive gaming.

HP Victus 16 can run most of the games at 1080p without any problem. However, its performance is still questionable because laptops like MSI Katana 76 with similar spec performance exceedingly better in games like Redemption 2. Similarly, Asus ROG Zephyrus G14 with akin feature performs twice as good as the HP Victus 16 in GTA 5.

The 4.9 X 3.2 touchpad of HP Victus 16 is quite big and is comfortable to use. Besides, it is precise and performs well for gaming. Similarly, the laptop brags a large keyboard with a number pad. And just like the touchpad, the keyboard is also satisfactorily precise.

However, on the negative side, the keyboard is not in the center which makes it a bit difficult to hit the keys precisely at times. Likewise, the bevels on F and J keys are extensively small and are honestly not very useful. Also, coming as a gaming laptop, we expected a touch guide on WASD keys.

The battery life of HP Victus 16 is a big disappointment. It lasts for about four hours on general use. On the other hand, if you run graphically demanding games then it will take just an hour to display the low battery warning.

Heat is another issue that you will find in HP Victus 16 especially when you play intense games. However, in casual use like surfing the web or watching your favorite movies, the laptop stays cool at 91degrees. On the contrary, the machine reaches around 118 degrees if you run graphically demanding games.