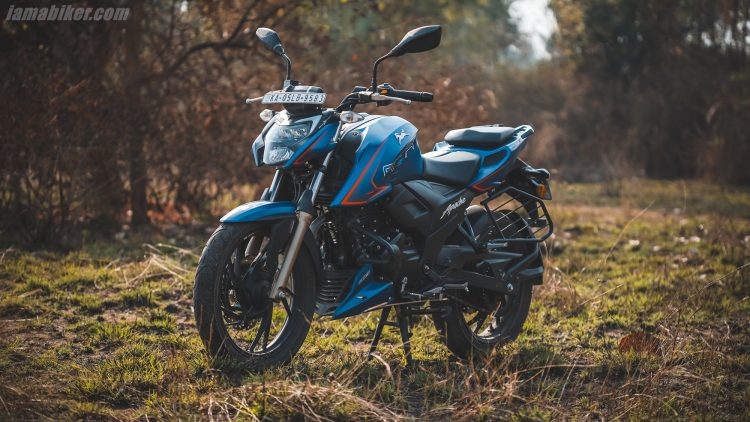 Whenever we talk about the 200cc naked bikes, we have either Bajaj Pulsar NS 200 or the TVS Apache RTR 200 4V in our minds. The rivalry between TVS Apache and NS 200 is one of the most competent rivalries in the market of motorcycles. However, NS 200 has been dominating the game for a long time, which will now change with the recent launch of TVS Apache 200 4V.

Besides, TVS has become the first motorcycle manufacturer to introduce the BS6 variant in the Nepali market. The solitary importer for TVS, the Jagadamba Motors, launched the beautiful Apache RTR 200 4V RT-Fi BS6 on the 9th of September, 2021. Read the complete article to know if the TVS Apache is better than the well-fame Pulsar NS 200.

TVS is well-known for producing feature-centric bikes. Similar is the case of the new Apache RTR 200 4V RT-Fi BS6. The 2021 RTR BS6 brags the GTT technology. It stands for Glide Through Traffic which helps you in traffic congestion. The purpose of this feature is to save fuel. It does so by injecting a small amount of power to move the vehicle forward in 1st gear. Surprisingly, the feature also works in the 2nd and 3rd gears.

Other than that, the instrument cluster is another enticing element seen on the new RTR. It allows you to connect your smartphones through Bluetooth and offers you great features. All your messages and calls are shown on the cluster of the bike itself. Besides, it also allows you to reject and silence your calls. It also shows the battery level of your cellphone. The navigation assistance, on the other hand, guides you with your location. Further, it uses the gyro sensor of your device to display a lean angle.

The riders have highly appreciated the aggressive appearance of the TVS Apache RTR 200 4V RT-Fi BS6. The newer variant adapts most of the bodily appearance from the prior version. However, the angry-looking headlamp flaunts the all-LED unit with a beautiful new design. Similarly, the obsolete kick starter does not exist in the new BS6 variant.

The preferable split stepped seat is still the same. The split-LED headlights, along with the racing graphics, certainly make the bike a lot more athletic and aggressive. The peculiar matte blue version of the bike is inspired by the “One Make Champion” race bikes. Offering a comfortable switch and easy interface in the handlebar, TVS has left no room for complaints.

Besides, the TVS Apache 200 4V incorporates the wave bite key, mainly found in inexpensive bikes. A wave bite key is a unique electronically coded key that prevents your vehicle from any theft. Another modification is seen in the rear-view mirror. The modish rear-view mirror makes the bike exceptionally sportier and brawnier.

Talking about the dimensions, the new Apache is 2050mm long, 1050mm tall, and weighs exactly 153kgs. Thus, the bike is 15mm longer and 2kgs heavier than the precedent version.

The 3000rpm bike is suitable for both city rides and off-road trips. Similarly, we can see a significant improvement in the gears. They are extensively smooth in contrast to the previous version. However, if you increase the rpm to 7000, you will feel vibrations on the handlebar and foot pegs.

The newer system is much more on, the stiffer side for a better handling purpose. Similarly, the TVS Remora tires also seem to be a lot grippier and don’t lose adhesion at higher speed cornering. The snuggly seat lets you ride the bike for a long time without any discomfort. In addition, the 270mm front disc brake and the 240mm rear disc brake does a brilliant job. However, dual-channel ABS doesn’t have the switchable ability.

One of the benchmarks of TVS Apache RTR 200 4V RT-Fi BS6 is its mileage. It offers you a figure of 44.5kpl on highways and 41.4kpl in the city, which is very impressive.

Coming with the KYB fork and Showa mono-shock, the new Apache RTR 200 4V RT-Fi BS6 is very comfortable to ride. The aggressive bike with its double-cradle frame can take on corners like a child’s play. However, some riders may find it a little too supple.

The Euro grip Protorq Sport, SR tyre on the rear, provides extra grip to the bike, making it smoother and agile. However, the braking is somehow the downside of this bike. Not saying that it is worthless, but we expected the 300mm front disc instead of the customary 270mm.

Final Verdict and Price in Nepal

The new Apache RTR 200 costs around Rs.3,84,000 in Nepal. The price is almost Rs.46,000 more than the previous version. This increment in the price tag is also due to the recent increment in taxation from the government. You will be getting several new features and better engine performance in the new TVS Apache RTR 200 4V RT-Fi BS6.

A premium design and features like GTT, Smart X Connect, and many more will certainly not disappoint you. Although the price has gone a little up, you can take our words that it is worth your money.

[…] that boasts over 10PS of power. Besides, the new Race XP is the fifth variant of Ntorq. The new TVS Ntorq 125 Race XP is also the most expensive scooter in this range. It features the same old panel, […]

Thanks for the information. Great article with useful content regarding The Environmental Benefits of Driverless Cars. Wish To See More in the coming days.