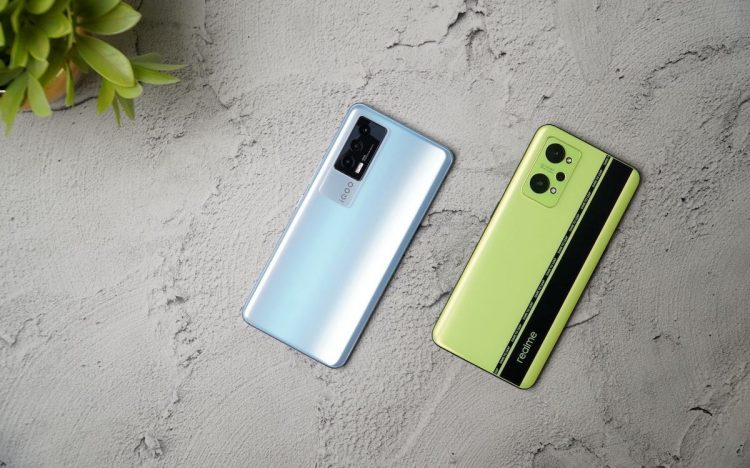 Poco introduced the F3 GT, which is a strong challenger in the mid-range gaming arena, with pricing beginning at Rs.51,999. Now, here we have a smartphone from Realme that is priced comparable to the Poco F3 GT but does not scream “gaming.” It has no trigger buttons and no RGB lights, and it comes in a variety of bright and subdued colors. So, does the Realme GT Neo 2 satisfy the demands of the mobile gamer without the gaming thrills?

There are three color options for the Realme GT Neo 2: Neo Green, Neo Blue, and Neo Black. There is just one version to pick from when it comes to variants. In Nepal, the basic 8GB RAM storage model costs Rs. 54,199. A 6GB RAM model, on the other hand, would have made the GT Neo 2 more accessible.

The dual-tone glass rear panel of the Neo Green Realme GT Neo 2 device is unusual. The green portion has a soft, matte surface, whilst the two black stripes that span the length of the panel have a glossy touch. Because the rear panel is constructed of numerous panes of glass, it does not pick up fingerprints and is rather simple to grasp. This is ideal for a smartphone that will mostly be used by gamers. There are no stripes on the Neo Blue and Neo Black choices, and although the former has a gradient, the latter is absolutely plain.

Although it appears to be metal, the mid-frame is composed of polycarbonate and has a matte surface. A matte grey silicon cover is included in the box. This makes the phone a little slippery. The camera module sticks out roughly 3mm from the rear panel. This is similar to the ones seen on the OnePlus Nord 2 and Oppo Reno 6 Pro. When put on a level surface, this phone will shake quite a bit.

I admire the variety of colorways Realme has created for the GT Neo 2. However, the bright green Neo Green finish is pretty noticeable and will attract a lot of attention. If you don’t want to stick out, the smokey Neo Blue or satin-like Neo Black would be the ideal choice.

The display is surrounded by a narrow bezel. When compared to the Realme GT Master Edition and the GT, the 6.62-inch display is rather wide. This is ideal for gaming and you’ll need two hands to utilize this phone. With a weight of roughly 200g, the Realme GT Neo 2 seems lighter than it appears. There is no IP certification, however stereo speakers are included.

The Qualcomm Snapdragon 870 SoC powers the Realme GT Neo 2. There is no microSD card for memory expansion, and the phone comes with up to 12GB of RAM and 256GB of UFS 3.1 storage. This phone has two Nano-SIM slots and enables dual 5G standby as well as multiple SA and NSA 5G bands. Wi-Fi 6, Bluetooth 5.2, NFC, and the conventional satellite navigation systems are among the communication protocols. The Realme GT Neo 2 comes with a 5,000mAh battery that can be charged with the included 65W charger.

The GT Neo 2 has a 120Hz refresh rate and a full-HD+ resolution AMOLED display. The display also has a touch sampling rate of up to 600Hz, which is believed to be handy for playing games. What I wanted to see is HDR support, which would have been a fantastic feature given the screen’s enormous size and made it more better for streaming content. The phone also includes stereo speakers that are fairly powerful and provide an immersive gaming experience.

In benchmark testing, the Realme GT Neo 2 produced some outstanding results. It outperformed the competition, scoring 7,19,508 in AnTuTu and 1,005 and 3,152 in Geekbench’s single and multi-core tests, respectively.

The Qualcomm Snapdragon 870 CPU is powerful enough to handle even the most demanding 3D games. Furthermore, the GT Neo 2 remained cool even during extended gaming sessions, owing to its big stainless steel cooling system and an unique “diamond thermal gel” that serves as a heat absorption layer, according to the brand.

On the Realme GT Neo 2, there is a game option dubbed ‘GT Mode’. It increases the processor’s clock speed and the display’s touch sampling rate (the panel can go up to 600Hz), as we’ve seen on previous GT-series devices, but there isn’t a significant difference in responsiveness when compared to when GT Mode is turned off. The standard Game Space app also includes a slide-out console where you can modify swipe and touch sensitivity, but these aren’t per-game settings, so they’ll have to be altered between games.

The 5,000mAh battery of the Realme GT Neo 2 is the largest in a GT-series smartphone to date. The phone’s battery life is extremely excellent when used casually, and it easily lasts a day and a half, even with occasional gaming. In our regular HD video loop battery test, the GT Neo 2 lasts an amazing 28 hours and 56 minutes. For a 5,000mAh battery, charging is also fairly speedy. In just 44 minutes, the phone can go from a dead battery to 100 percent charge.

The Realme GT Neo 2 has a 64-megapixel primary camera, an 8-megapixel ultra-wide-angle camera, and a 2-megapixel macro camera on the back. A 16-megapixel front-facing camera is in charge of selfies. The camera app design resembles that of other Realme smartphones running Realme UI 2.0. The most critical settings are just a tap away, and a handy slide-out tray on the left side allows you to access more complex features like tilt-shift mode, frame selection, and a shutter timer.

In general, photos shot in daylight come out rather saturated, although they have good clarity and dynamic range. The ultra-wide-angle camera reproduces significantly less detail, and photos with brighter regions display visible purple fringing.

Selfies taken with the front-facing camera have high resolution and dynamic range, although they are frequently overexposed. The fixed-focus macro camera takes nice images, but with a resolution of only 2-megapixels, they lack clarity.

In daytime, the video quality is mediocre at best. The camera can shoot at up to 4K at 60 frames per second, but there is no stabilization at these settings, so the clips are extremely unsteady.

After more than a week of use, it’s evident that the Realme GT Neo 2 isn’t an all-arounder. This is mostly due to its unstable camera performance, which, considering its price tag, fell short of expectations. Simply told, Realme’s own GT Master Edition offers superior camera performance for a far lesser price, beginning at Rs. 44,000.

The Qualcomm Snapdragon 870 SoC with this phone’s cooling system provide intensive gaming performance that you won’t find anywhere else. This phone lacks the specialized trigger buttons and RGB lighting seen on the Poco F3 GT, but it does provide a high-quality AMOLED display and long battery life.

It’s difficult to suggest anything else to a mobile gamer at this pricing point. The Xiaomi Mi 11X boasts the Qualcomm Snapdragon 870 engine and an IP53 rating, but it sacrifices display specifications, battery life, and charging speed in favor of a thinner design. So, if you can live with the GT Neo 2’s middling camera performance, it’s still a decent deal at Rs. 54,199.

If you are looking for a smartwatch to go with this gaming smartphone than the Realme Watch 2 Pro might just be the perfect choice. Check out our review of the smartwatch by clicking here.