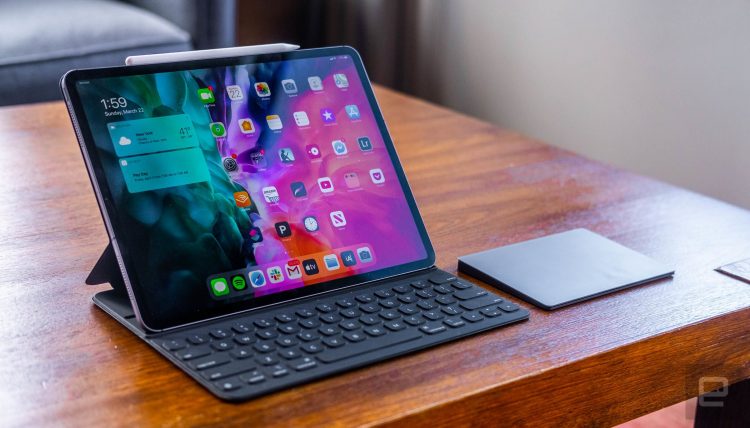 Apple’s new iPad Pro is not a massive advancement or refinement over its prior version. However, certain tempting aspects will not let down their audiences. Moreover, the specifications are quite comparable with the baseline MacBook Pro. Likewise, Apple also taunts it to be a replacement for most of the mid-range laptops. The 2020 iPad Pro is super-premium, alluring, and powerful. Besides, it also supports the mouse and trackpad. However, the price will break your bank. Read the complete article to know all about the new iPad Pro 2020.

The new Apple device has metal attire which is either gray or silver. The 12.9-inch iPad weights 639.5gms. It is super-thin and the quality of the body itself hums the cost of the device. Similarly, the sonorous quad-speakers are found in the top and the bottom panel. The sound quality is exceptionally euphonious. Also, if you find it difficult to carry a 12.9-inch iPad then you can go for the 11-inch variant. This variant is about 168gms lighter than the 12.9-inch iPad.

However, the modish iPad Pro doesn’t include the obsolete 3.5mm jack and the lighting port. It incorporates the present-day USB-C. Likewise, the enormous display generates a resolution of 2732 X 2048 with 600 nits of maximum brightness. Besides, it also packs the feature of anti-reflection.

Apple’s iPad Pro is built around the A12 architecture which is quite old-fashioned. However, the increase in GPU makes the performance better than before. In addition, it also packs the 6GB of RAM. Similarly, the sturdy battery lasts for an average of 8hours with full brightness and video streaming. The downside is the 18W charger. Although it charges the device in 12hours, we expected a more powerful charger from Apple. But now, we have the Type-C port on the iPad which will allow us to use the fast chargers.

The LiDar camera is a unique feature in iPad Pro 2020. It assists in measuring the distance for augmented reality applications. Most of the high-end devices of present days have the time-of-flight sensors with a solitary infrared beam. In that sense, this is quite a new modish feature. Likewise, this feature is streets ahead of the single-camera AR. To make things easier, now, you don’t have to scan the entire room to create a map. Rather, you can just touch and place the object at your desired place.

The dual cameras on the back make the ravishing look of iPad Pro even better. the 12-megapixel primary camera takes preferable photos. The quality of pictures from this sensor is almost like that of the iPhone 8. Besides, it also has a 10-megapixel wide-angle lens. It permits you to take pictures of expansive landscapes. However, there are not many changes seen on the front-facing camera. It is still incorporating the 7-megapixel sensor.

The new Apple iPad Pro proffers a lot of variants. At first, you must choose between the 12.9” variant and the 11” variant. After that, you have the choice between the cellular + Wi-Fi version and the solo Wi-Fi version. The price of Apple iPad Pro starts from Rs. 1,16,000 and goes up to Rs. 2,37,000. The baseline variant packs a 128GB of storage while the high-end model has 1TB of storage. While we see a lot of diversities in storage memory, all the variant has a static 6GB of RAM.